Amazon finally opened its first cashier-free store this week. From Monday, members of the public were able to try the system that the e-commerce giant has been working on for over a year. Amazon employees have been using the store since December 2016 in a test phase. At the time, the company said that it expected Amazon Go to be rolled out in a matter of months, but the store has now opened in Seattle.

The Amazon Go system works using a series of cameras, sensors and a shopping app loaded to a smartphone. When you enter the shop, you pass through a gated turnstile and scan your phone app. This is pre-loaded with credit card details during the registration phase, so you can’t just walk in off the street if you’re not registered for it.

Cameras and sensors track your actions

Cameras and sensors track what the customer takes from the shelves, adding it to their virtual cart. If they put it back on the shelves, it is removed from the cart and, if they pass through the turnstiles and leave the shop with it, it is automatically charged to their account.

The shop, which promises “just walk out” shopping, is not entirely automated. Amazon says that there will be staff on hand to answer queries, and there will also be people preparing fresh food in the in-store kitchen, as Amazon Go is actually more of a deli or corner shop than a book or gadget store. While Amazon originally disrupted traditional brick-and-mortar shopping by taking e-commerce to a whole new level, it now has 13 physical bookstores itself, as well as a number of grocery pick-up points and, following its $13.7 billion (£9.9 billion) acquisition of the high-end supermarket chain Whole Foods Market last year, hundreds of whole food shops.

No plans yet to roll out technology to other stores

As of yet, Amazon says that it has no plans to roll out Amazon Go-style shopping to its Whole Foods operation or other physical stores. While it’s past the test phase and into the public domain, this still looks like an experiment for now, albeit one with the potential to disrupt the way we shop once more.

Amazon Go Vice President Gianna Puerini said that this week’s opening was down to four years of legwork on the technology.

“This technology didn’t exist. It was really advancing the state of the art of computer vision and machine learning,” she said.

Dilip Kumar, who oversees the technology behind Amazon Go, told the Financial Times: “Five years ago when we started this, we said: can we push the boundaries of computer vision and machine learning to create this effortless experience for customers to come in, take what they want, and leave?”

Amazon isn’t the only international e-commerce player looking to revolutionise physical shopping. In China, Alibaba has opened 20 “hybrid” supermarkets. Customers can either order online and have members of staff find their items for them or shop themselves, scanning items to their smartphone as they go. They can then pay automatically using Alipay, the app that has become a popular cash alternative in China. 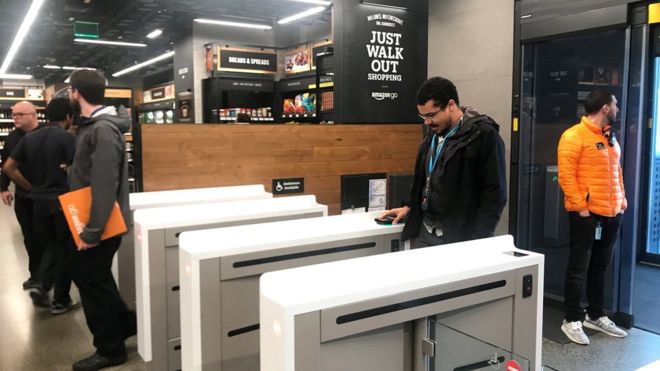